Shalom, my name is Yoni and I am the Co-founder and CEO of Amutat Kaima, an Israeli NGO which views agriculture as one of the key ways to re-engage youth who either officially or unofficially leave the school system. Many are lost and alone; some are on the streets and involved in drugs and petty crime; others are victims of sexual/physical abuse. Most feel no one cares. These are kids who are beautiful and have amazing potential but cannot adjust to conventional educational or social settings and tend to have profoundly negative relationships with adults.

In 2013, a group of likeminded mostly under 30s and I had the crazy idea of establishing an educational farm on Jerusalem’s rocky hillside on a series of neglected plots of land already zoned for agricultural use. Today, after an enormous investment of sweat equity, that farm, located in the village of Beit Zayit, just minutes from Israel’s capital city, is now the first in our growing Israeli and international network.

“Children learn how to make good decisions by making decisions, not by following directions.”

These words by Alfie Kohn, educational author, reflect my strong belief in the absolute necessity for the young person to understand him/herself as the most important person in determining his/her future.

We see the farm as a safe, intergenerational place for the individual to explore his/her curiosity and potential as an entrepreneur – both of which we see as great educational tools. These young people, most of whom have been viewed by society or have viewed themselves as not fitting in, are part of the daily decision making of how to run the farm. At Kaima, they know what they think and do matters.

Indeed, our young farmers are essential to the serious business of bringing to market some four tons of 30+ types of fresh organic vegetables every year. We sell direct to the public according to the farm-to-table Community Supported Agriculture (CSA) model with proceeds supporting more than 50% of our operating needs across our Israeli network.

CSA is a very romantic way to grow, market, sell and enjoy fresh organic vegetables. It’s really different and very exciting! Believing in the “farm to table” lifestyle, CSA members agree to purchase a portion of a farm’s harvest, thus providing a constant funding stream to help support the endeavor. The Kaima twist – we created “Youth Community Supported Agriculture,” or YCSA, a novel re-interpretation of the platform utilizing employment as an educational tool to help reconnect young people to society. Kaima’s young farmers learn new skills, easily transferrable to other parts of life, and earn a salary, incentive which helps them take responsibility for themselves, the team and the farm.

Sometimes when we dare to live our dreams, results fall short of actual impact. However, in our case, the results surprised even us! Within six months on the farm, 80% of our young farmers return to normative educational settings and most perform either military or national service. Most importantly, they really feel good about themselves. All stay connected to the farm even after they move on in life. Today, Kaima oversees four farms in Israel (Beit Zayit, Beerotayim, Hukuk, and Nahalal) and one in Africa (in Tanzania). Across our local farm network, 700 weekly customers consume 180,000 kilo of Kaima organic veggies annually, while supporting our educational mission.

Tikkun Olam, that compulsion to mend the broken, is woven into the DNA of Kaima. Our ethos, which stresses the inter-relationship between environmental and human sustainability, merges a love of the land with a commitment to redirect the lost young person to a more positive path. To this end, we have:

• Developed an operating model based on maintaining long-term financial strength through our three-point cost-sharing formula with income drawn from a) funding generated through farm sales and user fees; b) government buy-in; and c) philanthropy. The model assumes that as self-generated income and government support increase, philanthropy will decrease.

• Created a network of four farms in Israel and one in Africa.

• Provided long-term employment to 400 youth and rerouted them to normative educational and social settings.

• Tweaked our model to provide intensive programming for special-needs seniors, young adults after incarceration or following drug rehab, and others.

• Created an educational environment in which the individual is listened to, not talked at, thus fostering curiosity, creativity and critical thinking, and stimulating entrepreneurial action.

• Expanded our core young farmer initiative to include a number of auxiliary programs designed to open new opportunities and keep the young person engaged and less likely to return to the lure of the streets.

• Created an educational model that illustrates the correlation between hard work, monetary reward and personal pride; supports the return to school and/or entrance into the job market; promotes army/national service as an important social contract; and encourages a shift in mindset.

• Brought to market nearly one million kilo of organic veggies.

• Adopted the practice of donating vegetables to households in need, thus modeling responsible business practices and living the value of tzedekah.

• Established the first commercial hydroponic greenhouse in Israel’s capital city, demonstrating both the viability and desirability of urban farming.

• Capitalized on the explosive growth of the global CSA movement in ways which address the leadership capacity of young people and the public’s growing desire to buy locally grown products.

• Participated in as the only Israeli organization in the US-based Jewish Farming Initiative, promoting our model as an Israeli venture with strong relevance to other Jewish and non-Jewish communities.

• Encouraged the proliferation of community-operated farms to provide alternative educational frameworks, particularly for those who cannot relate to traditional school/social settings.

• Provided the experiences, tools, and support for individuals to lead in matters of earth-care in their own communities.

PROJECT CAN BE EXPANDED

Kaima is already engaged in responsibly scaling up our self-designed educational mission and economic platform under the umbrella of the Kaima Innovation Incubator. Indeed, as outlined in our ten-year plan presented in 2015 to the Mantanel Foundation, we challenged ourselves to scale our model noting, “We envision a situation in which there will be at least five farms under the Kaima umbrella [in 2025], either by developing other self-run Kaima farms or by franchising the model to other social business entrepreneurs.” While we reached this target within four years, we have since slowed growth both in Israel and abroad to ensure our operating model is sustainable over time, not only for our current farms, but for future ones as well.

The conditions under which we will consider further expansion of our model, both in Israel and abroad, are within our reach; they include:

• Solid government support: Of critical importance is the need to lock-in strong government buy-in. After a multi-year effort, we have just secured an agreement from the Ministry of Welfare which will help double the youth we can work with at our mother farm within a year’s time. With the right funding we will soon begin the process of opening channels of government support on behalf of the entire Israel network.

• Secure strong philanthropic partnerships across the farm network: Donor support is needed for each network farm at significant levels during the first 3-6 years of operation after which self-generated income will increase and donor support will decrease. Though the Kaima Innovation Incubator, we are actively in the process of supporting each sister farm in their own efforts to establish local partnerships.

• Expand evaluation efforts: During 2020 we will extend the evaluation undertaken of our mother farm across the entire farm network. This will allow us to tighten our model, learn from mistakes made along the way, and begin the dual process of exporting our educational model to other NGOs (through conferences, printing, mentoring) and assessing our capacity to scale-up further.

FOUNDER OF THE PROJECT OR ITS MANAGER 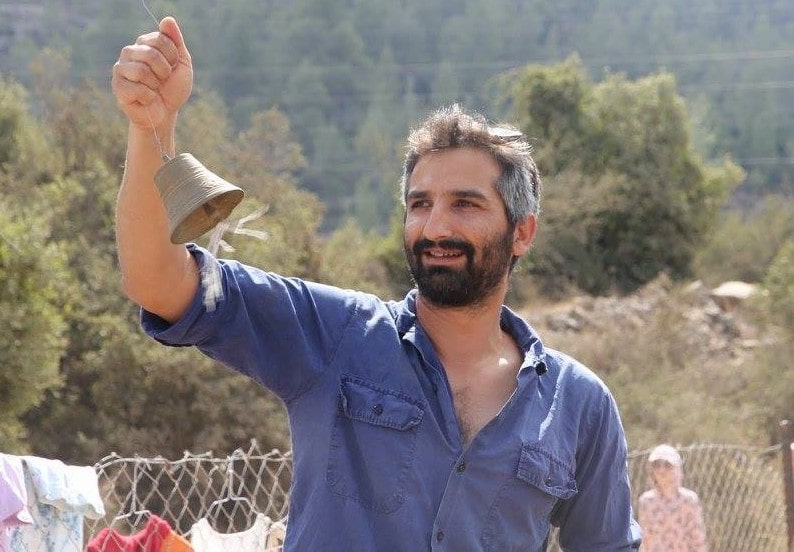 Yoni Yefet Reich is a natural farmer and educator and, importantly, someone who doesn’t see the difference between the two.

Born in Beit Zayit, a rural village just outside Jerusalem, Yoni graduated nearby Ein Kerem Community Environmental School, received his Bachelor of Law (LLB) in 2005, and graduated with an MA in Non-Profit Management in 2013.

Influenced by Polish-Jewish educator and Holocaust hero, Janusz Korczak, who advocated for the respect and hands-on involvement of children in shaping their lives, Yoni focused much of his early career on developing educational initiatives which place the young person at the helm. For many years, he managed Jerusalem’s first pluralistic high school, directed a student-run soup kitchen and community center for elderly immigrants, and led eight youth delegations to Poland to help restore forgotten Jewish cemeteries.

All personal and professional endeavors converged in 2013 when Yoni, joined by a small group of social entrepreneurs, cofounded Kaima, an Israeli NGO and commercial farm established in the same ancient terraces of his childhood. Kaima boldly challenges the “one-size-fits-all” construct applied to Israel’s national education system by re-engaging and empowering youth who have dropped out of school through a combination of hands-on organic farming, business learning, and community activities. On the farm young farmers (ages 15-18) and adults work the land, grow food to feed the community, and realize their unique strengths in the process. The operation is serious with our original, mother farm responsible for producing nearly 90,000 pounds to 400 weekly customers!

Yoni was once interviewed about what he considers Israel’s most pressing educational challenges. His response:

1. Stale and unresponsive national educational system
2. Preoccupation with matriculation as the goal and measuring rod for the young person’s sense of self-worth and avenue to future options
3. Lack of creativity in Israel’s school curriculum

Kaima (meaning sustainability in Aramaic) is a direct response to this challenge. The farm is the embodiment of Yoni’s (and other’s) passion for working with young people, his belief in the restorative power of nature, respect for “out-of-the-box” thinking, belief in the young person as the primary decision maker in his/her own life, and contention that people should know who grows their food. On a daily basis, Yoni may be found deep in the fields picking veggies alongside our youth; leading workshops on sustainable agricultural practices for visiting groups; lecturing at Hebrew University on the social imprint of our educational model; lobbying for greater government support of the Kaima movement; promoting our educational methodology with other non-profit organizations; training our sister farms; jamming on the piano in the Kaima music room at the end of the work shift; or snacking on our famous blueberries.

Israel’s educational system is in serious trouble — a victim of decades of decline, too large classroom size, and instructors who do little to trigger student curiosity. Moreover, too many youth are burdened with the stigma of being considered “at-risk”- a label which can follow them for life. These are but some of the problems which will take time and enormous resources to fix. Until then, simple people need to work together to create alternative ways to connect to these kids in more holistic ways.

https://www.kaima.org.il/home
All The Projects
The Next Project